Indices like Hagerty’s show a strong performance in the classic car market. Is it now the right time to fulfill your childhood dream and buy that classic car you’ve always been fascinated by?

While stock markets tend to take a break following the year-end rally, the classic car market usually starts at the beginning of the year with important lighthouse events. In early 2016, for example, in the space of two weeks, major auctions were held in Arizona and then in Paris, which were significant both in terms of the number and overall caliber of the cars up for auction.

RM Sotheby’s and Bonhams’ almost simultaneous activities on two continents has made it possible to make an even closer comparison of the results, which, incidentally, were not very different from those achieved by other renowned classic car auction houses: Gooding & Co. in America and by Artcurial in Europe. The numbers immediately show several values, such as the sales percentage – with minor differences of a very few percentage points – which was around 84-85%, with a generally extremely positive trend also in terms of prices.

It is also true that, beyond the highly-publicized record prices achieved the assignment prices were often lower than the minimum estimate price and, in any case, below the prices achieved 12 months ago. It is impossible to carry out a single analysis of the overall trends by grouping together cars such as a Ferrari worth over 30 million euros and a Smart worth 22,000 euros, as there are too many differences at stake. Yet, it is also true that there are common trends that deserve consideration.

The general thought that unites these cars sold at record prices – whether it is the famous Ferrari worth 30 million or the Citroën 2CV Sahara worth 172,000 euros – is the fact that today’s market rewards unique cars which have a well-known and clean history, and which are well-maintained or perfectly restored. Indeed, these two extreme examples confirm the common thread of the almost 30 cars that changed hands at record prices at the start of 2016.

The 1957 Ferrari 335 Sport, with an estimate of 28 – 32 million euros, was awarded by the Artcurial auction house during its auction in Paris for 32.1 million, which includes the 10% commission charged on top of the hammer price. This makes this car (VIN tag 0674) the most expensive car ever sold at auction based on the euro and British pound, and the second most expensive based on the US dollar.

In terms of currency, it is worth pointing out that a revaluation, such as the fall of the euro against the US dollar, can have a strong impact on certain results. In fact, a 24% currency differential favors – by one quarter – potential American buyers, and, for the same quarter, penalizes potential European customers. This gives rise to clear inequalities in the purchasing power of the two potential buyers, one being from Europe and the other from the United States. 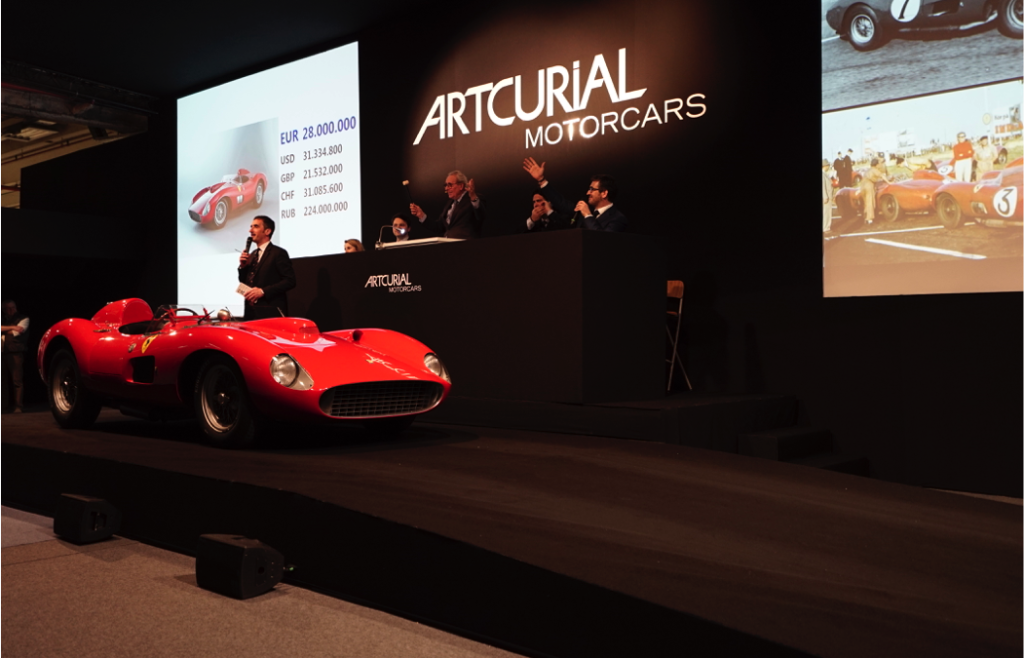 Since Artcurial’s record-breaking Ferrari came from a European collection, one could say that if the buyer is American, he paid approximately 7.5 million euros less than if he had bought it just 12 months ago. Moreover, the car in itself may be considered one of the most important cars in the world in terms of its manufacturer, uniqueness, historical period and racing legacy. One must also not overlook its more recent history with its restoration carried out by a major specialist and its place in a symbolic collection.

Staying at the Artcurial auction house, the 1961 Citroën 2CV Sahara (with VIN tag AZ44 76) was given a world record valuation. Whilst the cars vary greatly, as well as the prices at stake, there are similar reasons for which the 2CV, and specifically this 2CV, saw record prices: the rarity of this version, but also – and perhaps more importantly – its unique state of preservation and its fascinating and crystal clean history. It is also important to include the VIN tag of this “record-breaking” car. The car historian Dr. Adolfo Orsi – a leading expert of the market worldwide and creator of “The Classic Car Yearbook” for over 20 years, – has for years been pointing out that if two identical assets have an equal value, two vintage cars, even though the same, can sell for vastly different prices based on their history, their owners, or their current condition.

Down time for cars less appealing

Once the record-breaking cars had sold, what was left was the majority of the cars – nice but not unique – sold at prices often slightly lower than estimated (even considering only the minimum estimates) which were the same as, if not slightly lower than, 12 months ago. These figures are by no means a sign of crisis, but show a down time that every healthy market has following a long period (at least 24 months) of constant and continuous growth. Today, the estimated values are often provided by the vendors (and the auction houses are wrong to accept them) asking what they have seen happen so far with valuations increasing from month to month.

In actual fact, the sales prices show that buyers are willing to spend, but only up to the valuations of 6/12 months ago, which were around 15/20% lower but which, in many cases, are still 70/100% higher than the prices of early 2013. Meanwhile, botched cars or those with an unclear history prove to be less attractive for the market. They are difficult to sell and, where necessary, have to change hands at very low prices since most buyers today know how costly it can be to restore them properly in terms of time and money.

Indeed, a botched car is harder to restore than an original, even one in worse condition. This is precisely why the “barn finds” continue to arouse interest – original cars, often poorly maintained and in need of work, yet which have the undeniable charm of still being complete and made with factory installed parts. Whereas, those in good condition are increasingly sought-after as, in addition to their historical importance, they are increasingly rare compared to restorations.

What to look out for?

The interesting thing about today’s market – despite the growing number of investors – is its persistence with many buyers buying first and foremost for personal pleasure and not for business, with the idea of using the car for travelling or for competitions. In this sense, classic cars are a safe investment, since the factors at stake are not only economic but also involve a sense of personal pleasure.

Insights from a classic car collector