The year now coming to an end has been so packed with classic car events that it has been physically impossible to attend them all, or even to cover them all. The diary was so busy that it included an incredible clash of dates (when the Mille Miglia coincided with the Concorso d’Eleganza at Villa d’Este), and it often presented leading collectors with real logistical challenges. Indeed, in many cases, as soon as one event ended their cars had to be immediately shipped on to the next show, so as to be in place “in time”.

There is no doubt that 2016 will go down as a great year for the classic car movement as a whole, with the market doing well, events increasing in number, and more and more people, everywhere, discovering a passion for classic cars and wanting to support this field. Yet, as at the end of every year, there is always that one special “something” that, more than anything else, we know we will never forget. I am not talking about a specific event or a specific moment, because the answer will always be different depending on who we ask, and, as we found, sometimes surprising too. To illustrate this, we asked several friends to share with us their “classic” moment or event of the past 12 months.

Mark Gessler, President and Director of HVA, the American division of FIVA, is a hard core car guy with a deep passion for and a strong knowledge of this field. What’s more, he is the one who came up with classic car world’s greatest new idea of recent years. Realizing that classic cars are part of a country’s heritage, he started up the National Historic Vehicle Register program to collect, by scanning, all the available information on the most important cars in America’s history, archiving all the findings in the Library of Congress. Gessler told us that his highlight of 2016 was the Woodward Dream Cruise, where they participated with the very first Chevrolet Camaro built, chassis number #N100001. Woodward Avenue, which starts in downtown Detroit, was the very first four-lane highway built in the USA. Since 1995 this August meeting has become more and more important. “Nobody is in charge of it,” says Mark, explaining that it is a spontaneous gathering, where families come along with their car and picnic set and join in, spending the day and the night watching the cars slowly cruising by, or driving their own cars. It is estimated that in 2016 about 1.5 million people and 400,000 cars, mostly (but not only) classics, took part. “It is like a Mille Miglia, only in slow motion.”

As mentioned, the car HVA picked for the event was the first Camaro built — a very special choice considering that the model has just celebrated its 50th anniversary. “This very car has a wonderful history,” says Mark. “It was discovered by a 13 year old a few years ago. This young guy spotted the car, and had to force his dad to buy it and later they discovered, reading the chassis number, that this was the very first one built.” The Camaro chassis numbers are quite strange, because as many as 52 pre-series model cars were built ahead of the launch so that they would already be available at the dealers’ premises on the day of the official unveiling. These cars were assigned a dedicated series of numbers. This car is the very first of the pre-production 52 and at Woodward it was on display in the HVA glass cube. The car will soon be registered in the HVA archive, the fifteenth car to receive this privilege.

As a board member and Chairman of the Motoring Committee of the Royal Automobile Club (RAC) in Great Britain, Peter Read has a unique and broad perspective on what the classic car movement is, and so we were curious to know how he would answer our question. We imagined he would say something related to the London to Brighton Run, since this event has, historically, always had very close links with the RAC, but he surprised us: “In September 2016 we opened, in the RAC Woodcote Park clubhouse in Epsom, a new restaurant, named Stirling’s.

The restaurant has been designed to encapsulate the life and tastes of Sir Stirling Moss, hence the name” he told us. Peter went on to explain it had been planned that Sir Stirling himself would take part in a procession of classic cars heading to the new restaurant. He had been meant to be at the wheel of a Jaguar C-Type and Peter, too, happily joined in the parade in his Jaguar XK 120. In the end, because Sir Stirling had some difficulties hopping into the C-Type, there was a sudden change of plan, and the legendary driver got into Peter’s XK 120 instead. “When we arrived at the entrance to the new restaurant — ours was the first car to get there —, we had time for a wonderful chat and I asked him to sign my dashboard. I can’t imagine a better classic moment than this…” And neither can we!

Passionate opera singer, classic car connoisseur, writer and one of the USA’s leading experts on Italian cars, Donald Osborne spends 90% of his time surrounded by the most beautiful classic cars imaginable. When we decided to ask him to tell us his favorite classic moment of 2016, we knew, without a doubt, that we would get a fascinating answer. And we were right, twice over in fact, as he actually had two favorite unforgettable moments to share! Both, he told us “are more private than I initially thought”. Indeed, neither was directly linked to any particular car; rather, they were “two very specific moments that overwhelmed me with emotions”.

The first came in May when, after many years participating in cars with comfortable cockpits, Donald found himself, for the first time, driving the Mille Miglia in an open car. “I was behind the wheel of my dear friend David Wards’ 1946 Fiat 1100 Frua Barchetta, crossing to the village of Sirmione, on the shore of Lake Garda Lake;” he recalled, going on to describe how it was pouring with rain, leaving him and his co-driver feeling completely surrounded by low clouds and water: they had the lake to one side of them, it was continuing to rain down on them, and because of the Barchetta configuration of their car, there were countless gaps of various sizes that were letting in the water from the road too. By this time, he had long lost his battle to keep dry, but, despite being soaking wet, he felt happier than he ever had done. “I was taking part in a legendary race, in magical conditions, driving a 70-year-old one-off car. One of the wildest things I had ever done in my whole life!”

Donald’s second magic moment was of an entirely different kind. In August, at Pebble Beach, after years of work, he was finally ready to present his book Stile Transatlantico. Writing the book had been a huge challenge, he told us, but also an exciting undertaking and a project he had dreamed of achieving for many years. “The day I presented my book on the field of the most important classic car event in the world, I was feeling very nervous, like any writer would” he told us. “I couldn’t help thinking, what if I am the only one to find this subject fascinating? To my immense relief, I soon saw that, in fact, many other people shared my interest in the post-war contamination of styles between Italian and American design. And this really made me, on that day, the happiest of classic car writers.”

Englishman Nic Waller is both the voice of Pebble Beach, the world’s most important classic car show, responsible for announcing all the cars as they take the stage, and a member of the selection committee. In Europe he is the man in charge of organizing the Warren Concours of Elegance, established in Essex a few years ago. He is passionate about classics and loves driving them whenever he can. “For me, there is no doubt that the most “classic” moment of 2016 was the Giro di Sicilia” he told us. “I was there with my wife, driving a gorgeous 1966 Alfa Romeo Spider Duetto, chassis number #0001, the very first to roll off the Arese production line. The weather was magnificent, the twisty roads suited the car perfectly, and the scenery was, quite simply, perfect.”

Once a year, I think I might be allowed to express my own personal favorite, and for me the highlight of 2016 was driving in the Mille Miglia. After so many years covering the event as a journalist, I was thrilled when Mercedes-Benz Classic offered me the opportunity to drive their “Ponton”, alias 180 D, and therefore finally to “enter” the event as a participant. I will never forget those four days spent driving through the most gorgeous scenery, in the company of the most beautiful cars in the world, or the wonderful support I received from the Mercedes-Benz Classic Centre. And #CatchMassimo has been a great success too! 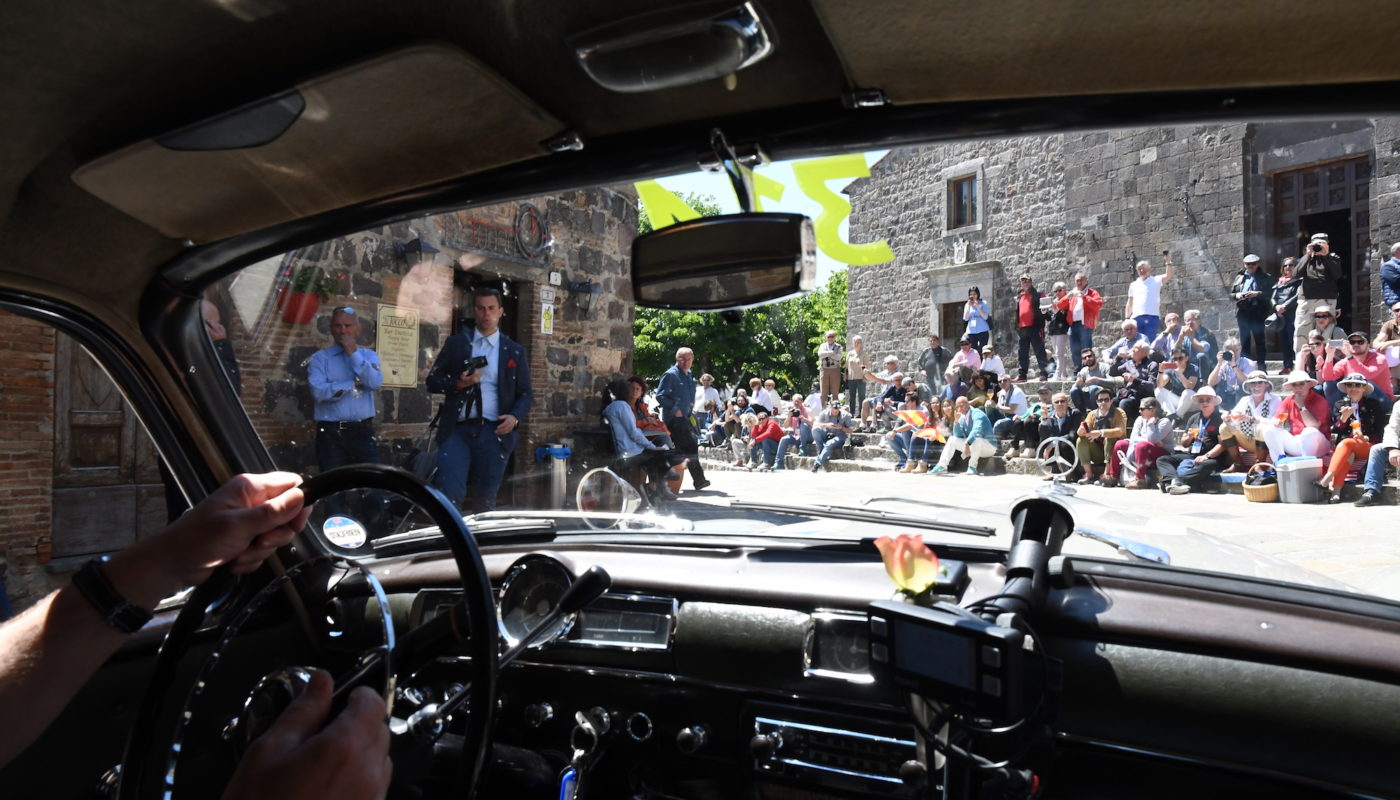