The most important Jet Set transport was not a whistling turbine-powered ‘plane, but a beautiful Italian wooden boat powered by a pair of grumbling American Chris-Crafts V-8s.

This was the Riva, the ultimate pleasure craft: a vehicle designed to transport the frivolous rich between their serious pleasures. A Riva is not what you would call a working boat. Very few manufactured products possess such physical gorgeousness and such evocative power. Never mind The Jet Set, the sight of a Riva excites all the complex emotions contained in the expression la dolce vita. In terms of things that float, there is nothing more hedonistic.

At first there was the Ariston, then the Tritone, afterwards the Florida. But best of all was the 1962 Riva Aquarama, a reference to the wide-screen Cinerama of the movies: this acknowledged the market’s relationship with Hollywood while quite correctly suggesting the boat could create its own dramatic effects. At launch, an Aquarama cost 10,800,000 Lire and would slither seductively across warm waters at 73km/h.

We feel so strongly about Riva today because the boats evoke a lost golden age of a world with a simpler dynamic. The “Jet Set” was coined by US columnist Cholly Knickerbocker, a pseudonym of Igor Cassini, brother of the Russian immigrant Oleg who was Jacquie Kennedy’s house-couturier and designed her infamous pill-box hat.

The Jet Set replaced Cassini’s earlier essay in pop-anthropology: “Café Society”. While Café Society sat on pavements or lurked in crepuscular nightclubs, The Jet Set traveled to get a tan. Travel was what, in fact, defined this group. The turbojet engine might have been developed by Frank Whittle in a grubby and unglamorous Cambridge laboratory, but its real purpose was to power the beau monde’s eternal vacations to the coast.

The Jet Set left London and New York for Paris and Rome. They had satellite settlements in Cannes, St Tropez, Portofino, Porto Ercole, Capri, Marbella, Ibiza and Paradise Island. Photographs taken here created the first global vision of the good life. Besides hotels and villas with pools designed to a common standard of nerveless perfection so that none but the very astute actually knew whether they were in Nassau, Italy or the Balearics, the Jet Set had its own uniforms and equipment and past-times: Capri pants, RayBans, espadrilles and, of course, the inevitable Riva to close the gap between lunch and cocktails.

The beginnings of Riva on the shores of Lago d’Iseo

Since 1842 the Riva family had run a boatyard at Sarnico on Lago d’Iseo, working in the vernacular tradition. Pleasure boats only came later. The original Tritone was influenced by the US Hacker-Craft and the ineffable Aquarama was influenced by America too. Its styling language of expressive chrome and pastel-coloured upholstery might have been developed by Detroit, but Riva seems nonetheless quintessentially Italian.

In their way, Riva and Ferrari were equivalents. Both Carlo Riva and Enzo Ferrari were practical men, more than dreamers. Riva (1922-2017) explained “I learnt more in twenty days at sea than in a year at the boatyard”. He called himself “ingegnere”, but the motivation was essentially artisanal and practical. Like Ferrari, Riva gave form to an Italian idea of beauty.

The culture of bella figura

The Italians enjoy figurative expressions and their elegant language is well adapted to them. Italy’s is the culture of la bella figura, a belief that appearances, comportment and graciousness are overwhelmingly significant in the well-managed life. And that applies to boats and cars as well as to people.

And then there is “la dolce vita” too.  This we owe to Federico Fellini whose 1960 film is one of the international cinema’s great undisputed masterpieces.  But the expression has much deeper roots in Italian culture and its elegant, historic postures. “Dolce far niente” they say : it’s lovely doing nothing. And if you can do nothing in a boat, so much the better:  Riva says “Sun, sea, joy of living !” 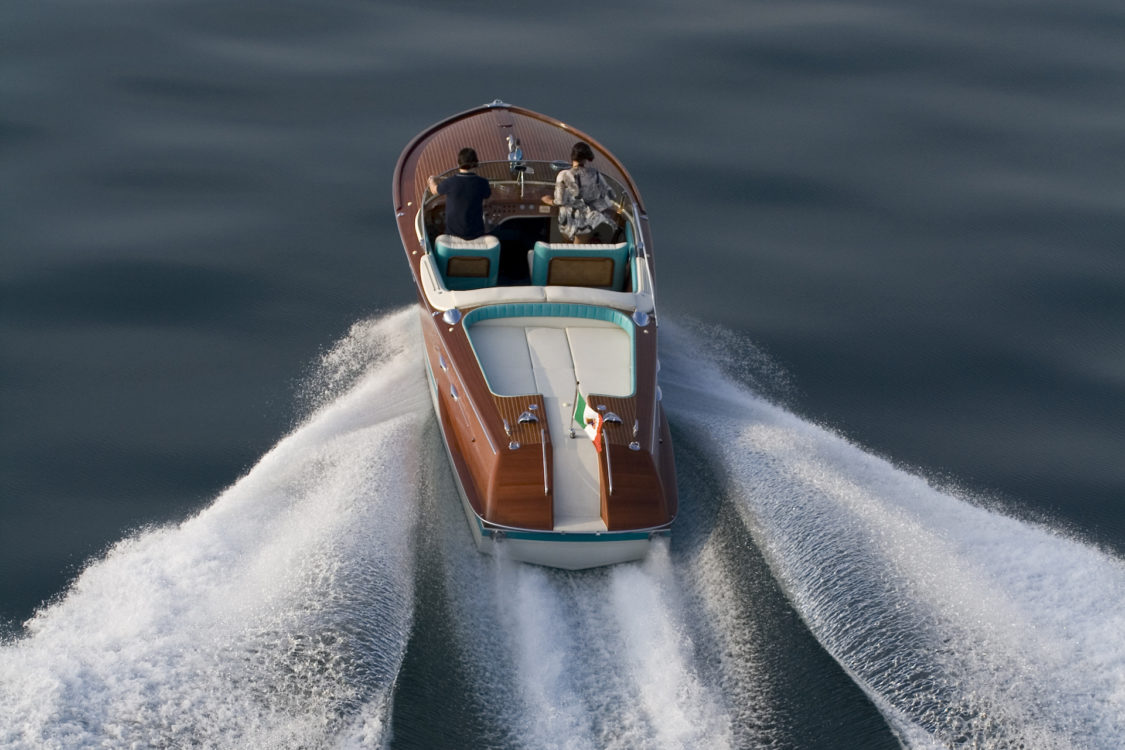 To an extent, by 2017 the Riva has been replaced by the superyacht as playthings of the very rich. Advertisements in the house magazine of the global superyacht community often read “For charter : £500,000 per week”. In this world you learn wonderful things. Only fifteen of the world’s largest superyachts have two helipads. Only seven have a heli-garage. The Eurocopter 145 superyachtsmen generally favour costs about $6.4m, depending on paint job and trim. It is viewed as a mere accessory. In comparison, Jayne Mansfield’s curvaceous Riva seems demure.

Riva’s corporate fortunes have tracked major patterns in economic life. Carlo resigned in protest at the obstructive unions. In 1988, Riva was bought by Vickers who, at the time, owned Rolls-Royce so it seemed a good match. Then Vickers lost its own way. But now that superyachts are priced in millions of dollars per foot and stigmatised by their vulgarity, Riva is re-assuming its role as a boat for the fastidious hedonist.

But the bitter-sweetness of transient pleasure always remains.  Tina Onassis, wife of the ship owner, once said (perhaps from behind the wheel of an Aquarama on the way to lunch at San Fruttuoso) “It’s not so difficult to be rich and happy”. You look at the Riva archives and, unless you are a very dull person, you probably agree.  As Carlo Riva said at 73km/h across the blue sea: “The sun nourishes the thread of life”.

All photos courtesy of Riva-World

Stephen Bayley Stephen Bayley is a British design critics, cultural critic, journalist and author. Amongst others, he writes for Vanity Fair, Financial Times, The Telegraph and Süddeutsche Zeitung. http://www.stephenbayley.com/